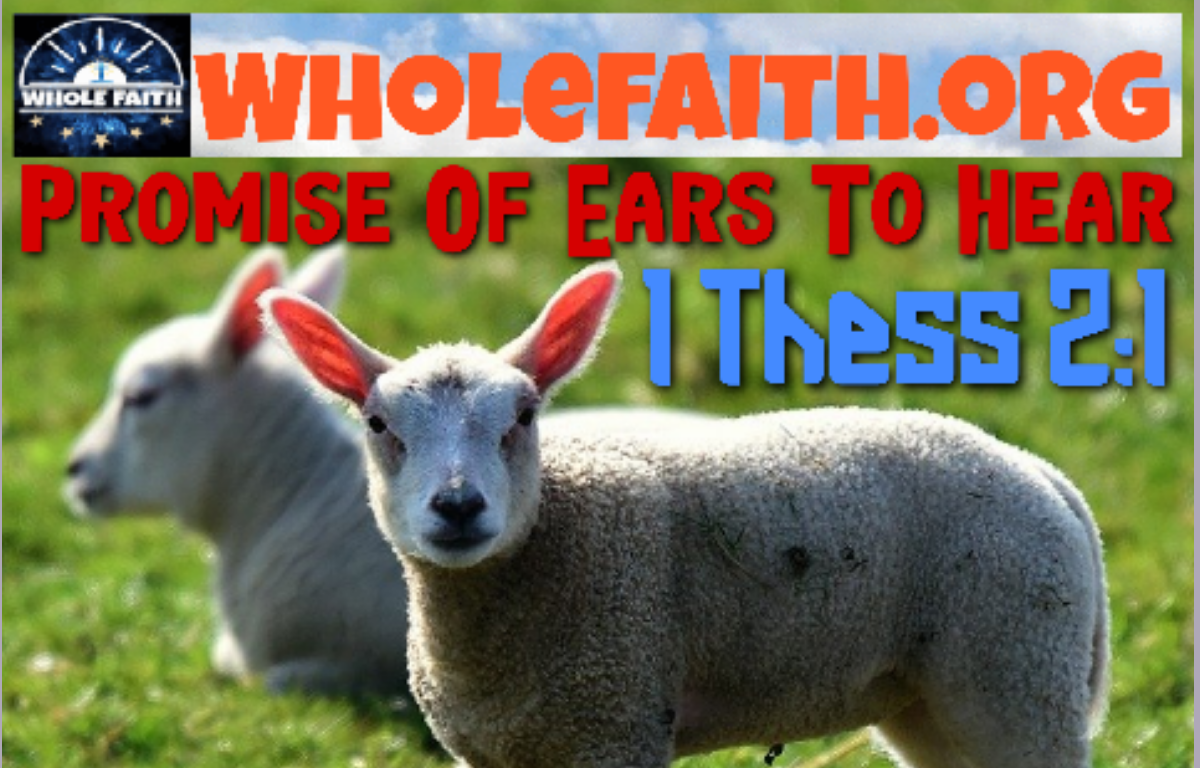 Ears to hear is a promise that spreading the Word of God is not in vain, will not be a failure and will be prosperous despite adversity and opposition, a certain promise of those with ears to hear. Paul was a former Pharisee named Saul, a devout Jewish leader who murdered Christians before Jesus appeared to him and he was converted to Christianity. Paul became a traveling evangelist and a church planter, which is a person who starts and opens up new Christian churches where needed. Paul funded his own ministry through tent making, he worked with his hands and did not get paid for his teaching, just like a rabbi of his day.

1 Thessalonians is one of the first books of the New Testament written, only Galatians could be written before it, even the gospels were published later. Paul started the church in Thessalonica in a Jewish synagogue and was drove out of town by an angry mob not more than a few months later, maybe even a few weeks later. The church had a lot of Greeks and converted Jews, mixed with a lot of women, so anger against the church was running rampant because deception was threatened by the truth.

Paul did not have a lot of time to spend teaching and training this new church he planted, so he sent Timothy to check on them. Timothy brought back such an amazing report of the church in Thessalonica that Paul wrote this letter to them. Sure, there were some people questioning his motives, which caused Paul to defend some things to certain people, but the promise of those with ears to hear was in action.

Jesus used the phrase ears to hear a lot, having first used it in Matthew 11 talking about John the Baptist, where Jesus said exactly who John the Baptist is and what he did, while at the same time condemning unbelievers, those without ears to hear. In every crowd there will be both believers and unbelievers, though outwardly, a person may not be able to tell which one is which because only God knows the true intentions of any person’s heart, which is why Jesus immediately went into talking about judgement for the unbelievers next.

Rest assured, if you have repented of your sins, which means you have made up your mind to stop sinning and you are moving in a new direction away from your sins, you are a Believer. If you have not repented, you have reason to worry because you are an unbeliever. Jesus himself said that in Matthew 11:20-23.

To the Believer who is spreading the Word of God, do not let your eyes deceive you. Your words will not fall on deaf ears, no matter what you think you see, there are people with ears to hear. You may be the one planting the seed, which is the Word of God, but another may have already planted the seed and you may be the one watering it. You may be reaping where you did not sow or sowing where you will not reap, but God is always the One making it grow.

Only God can convert an unbeliever to a Believer, which is why Jesus said, “Bless those who curse you, and pray for those who spitefully use you,” because Jesus hears the prayers of His people. Stephen, the first martyr of the Christian Church recorded in the Bible, prayed for those murdering him, just before he went to be with Jesus. Saul was the leader of those people.

Aided by Stephen’s prayer, Saul became Paul and was instrumental in growing the Christian church. Paul, though a Pharisee and a murderer of Christians before his conversion to Christianity, was actually a Believer all along. Saul heard Stephen spreading the Word of God just before Stephen was martyred. There is a promise that there is always ears to hear in every crowd.

For you yourselves know, brethren, that our coming to you was not in vain. -1 Thessalonians 2:1 (NKJV)