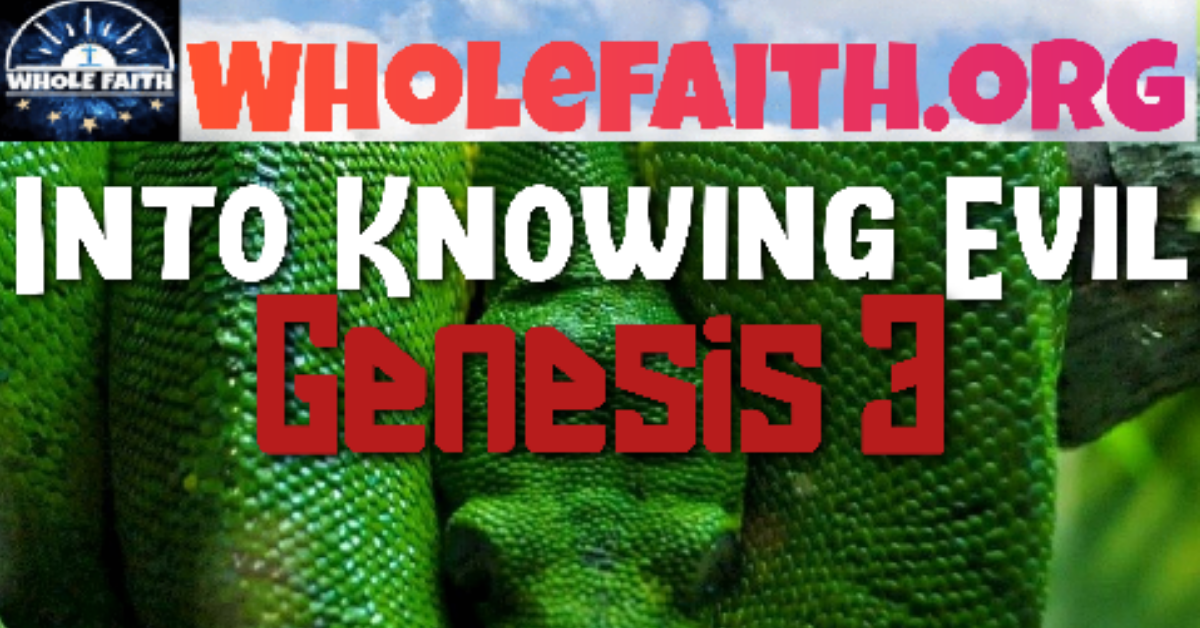 Eve was deceptively deceived into knowing evil in the garden of Eden, being spiritually pure, she only knew good, God, she had no way of knowing evil, Satan.

God always desired to be with us, which is why He never leaves us. No matter what, God is always around, waiting on us to choose Him. Our first parents, Adam and Eve, did not have a choice, they already knew God. All their knowledge came from God. The only choice Adam and Eve had was to separate from God.

God warned Adam to not eat from the tree of the knowledge of good and evil. After warning Adam, God began creating animals and brought them to Adam to name. After all the animals were named, in God’s time, He created Eve and gave her to Adam for a wife. At the end of Genesis 2 we read And they were both naked, the man and his wife, and were not ashamed.

Next, at the beginning of Genesis 3, we are introduced to the serpent, that deceiver of old, whose name is Satan. We get our first glimpse into his tactics, he always attacks when our guard is down, just before or after a breakthrough. Adam had just gotten married.

Can we assume they were married at least a year between the end of Genesis 2 and the beginning of Genesis 3 because God never changes and He set up everything to reflect Heaven and all His ways are consistent? In Deuteronomy 24:5, a newly married man must not go to war or do business for a year, plenty of time for Adam and Eve to make at least one baby in the garden of Eden.

I Chronicles 13:8 and 1 Chronicles 15:28-29, David and all of Israel are celebrating, just before an attack of the serpent happened. In 1 Chronicles 21:1, we finally see the serpent named as Satan. This time though, God gives David three choices for retribution and David chooses a plague because God is in control of the plague and He is more merciful than a person controlled by Satan. We see the dangers of glorifying ourselves in 2 Corinthians 10:17-18, But “he who glories, let him glory in the Lord.” For not he who commends himself is approved, but whom the Lord commends.

The serpent is mentioned again in 2 Corinthians 11:3, where Paul compares false apostles to Satan. Paul seen himself as a spiritual father to the Corinthians, a spiritual father who handed them over to Jesus like God handed Eve over to Adam. Paul wished them to remain spiritually pure to Jesus. Paul wrote, But I fear, lest somehow, as the serpent deceived Eve by his craftiness, so your minds may be corrupted from the simplicity that is in Christ.

The core of the Gospel is simple, God designed it that way so anyone can be saved. Paul goes on to say the Corinthians happily accept false teachers who can spit a good game, ones who preach a different gospel, ones who satisfy itching ears, just like the serpent deceived Eve into knowing evil in the garden of Eden.