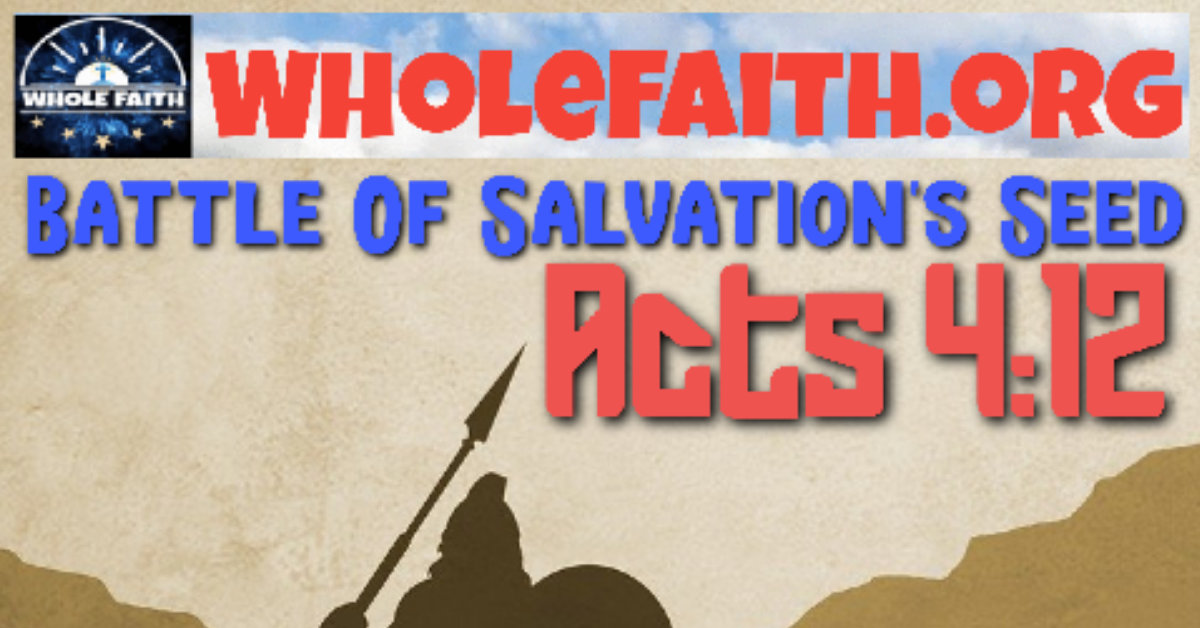 God gave a prophecy that said a Seed, or Offspring, would come from the woman, a Savior who would redeem humanity, leading to an earthly battle for souls.

Acts 4 starts with Peter and John being arrested for preaching about Jesus. By the power of the resurrected Jesus who was already back in Heaven by this time, a lifelong beggar at the gate of the temple was healed of his inability to walk, which is why he was a beggar, he was handicapped and could not work and begging was the welfare of the day.
The next day, they get out of jail and Peter and John are before members of the Sanhedrin answering questions and defending themselves. Peter and John were asked, “By what power or by what name have you done this?”

The meaning of this prophecy was hidden, like so much else is hidden so the serpent and his offspring are blind to God’s plan. Ever since God gave that prophecy, the serpent began looking to see who this Seed might be. To crush the head of the serpent is to take away all his authority, and the serpent would fight to keep his authority, no matter what.

The first candidate to be considered by the serpent as this possible Savior was Abel, Adam and Eve’s son, younger than Cain, who was their other son. Abel was a shepherd, which in itself gave a clue to some of the characteristics of the Good Shepherd. Cain was a farmer. One day, both Cain and Abel gave offerings to the Lord. (Genesis 4)

The Lord respected Abel and his offering, but He did not respect Cain and his offering because Cain only offered the fruit of the ground he grew, while Abel offered the same thing plus the firstborn of his flock and of their fat. Blood and animal sacrifice had been established by God as the only means to redemption from sin when God sacrificed an animal and made clothes for Adam and Eve after they sinned in the garden of Eden.

The fig leaves Adam sewed together in an attempt to cover up his and Eve’s sin were a symbol of works, a person trying to earn his or her salvation, when the only way for them to be forgiven for what they did was for God Himself to make a sacrifice and give them a gift, symbolizing God’s willingness for forgive them their trespass.

Animal sacrifices only covered up sin though and did not take away sin. Animal sacrifices were a substitute, a temporary fix to an eternal solution, just like miracles signs and wonders today are a temporary fix; a means to prove God to the unbeliever. Old Testament saints were born again into eternal life by their faith in the future Savior, by their hope in the future fulfillment of the Genesis 3:15 prophecy.

Cain ended up killing his brother Abel because Cain’s sinful nature was never replaced by the kind of faith Abel had in a future Messiah. Cain relied heavily upon himself and his own works, while Abel relied heavily on God’s promise, which caused Abel to be obedient to God and sacrifice the firstborn of his flock and of their fat to God. Two different types of works, Cain’s is a means to an end while Abel’s is the very hidden meaning of life.

Many more people after Abel, heroes of faith, possible candidates to be the promised Savior, lived and died in this sinful world, many of them killed by the serpent and his seed in hopes of not letting the Seed of the woman rise to power. By the time of Jesus, the serpent and his seed had taken over many places of power in this world, his kingdom of darkness had its fangs in every aspect of human life and culture.

Then Peter, filled with the Holy Spirit, said to them, “Rulers of the people and elders of Israel: If we this day are judged for a good deed done to a helpless man, by what means he has been made well, let it be known to you all, and to all the people of Israel, that by the name of Jesus Christ of Nazareth, whom you crucified, whom God raised from the dead, by Him this man stands here before you whole.”

All these different prophets who came before Jesus were building the foundations of faith in the Cornerstone, but, they all died, and many were killed, mere humans with earthly mothers and fathers, humans who were empowered by and at times filled with the Holy Spirit, but none of them lived a perfect life, they all fell short and sinned, all except Jesus, the perfect sacrificial Lamb, the Son of God, and the only name under heaven by which any person can be saved.

“Nor is there salvation in any other, for there is no other name under heaven given among men by which we must be saved.” -Acts 4:12